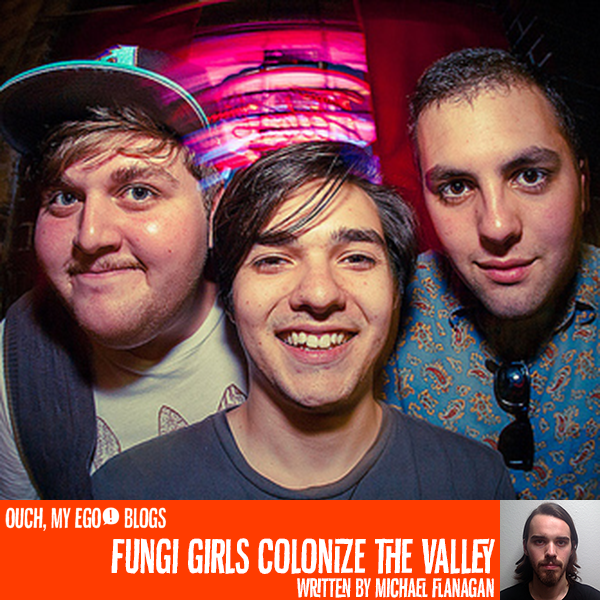 The Fungi Girls are a group of 3 “not so fun” guys who play psychedelic punk. Hailing from Cleburne Texas, somewhere outside of Fort Worth, the groupreleased their first album, Seafaring Pyramids, on Austin based label Play Pinball! Records while they were sophomores in high school . It’s a good pop tinged album, at times reminiscent of My Bloody Valentine.

They followed that up in 2011 with a fantastic album entitled Some Easy Magic, released by Chicago based record label HoZac. In interviews the band says they were listening to 1960’s German heroes CAN around the time of the albums conception. Throw that influence, the rest of Texas psych history, and some punk into a blender and you get Some Easy Magic.

In advance of their performance, March 11th, at Simon Sez in McAllen, OME was able to ask drummer Skyler Salinas about some of their influences, history, and plans for the future. Check out the interview with them after this music video for “Velvet Days” off of Some Easy Magic.

=What are some groups from the Fort Worth area that are good to know about?

+Sin Motivo are probably our favorite band out of Fort Worth at the moment. We consider them to be the best hardcore/punk band playing in DFW right now, if not all of Texas. Los Crudos inspired and all sung in Spanish, but they have their own look and sound that is just all around great. Outside of them, our homies Fogg are really fucking good and play Sabbath/Blue Cheer-inspired stuff and there’s also Year of the Bear, a great shoegaze-style band that my aunt and uncle play in.

=The Fungi Girls are known for getting some things done at a young age, particularly for making good music. Why do you think the fact that you were young when this happened is a point that people seem to focus on?

+Thanks man. It was and is something that’s brought up a lot because when we started, there weren’t any other 14 and 15 year old kids playing our kind of music. Although it’s definitely not near as bad as it used to be, it can be very frustrating because we’ve always wanted our music to speak for itself without people factoring in our age and saying things like, “Wow, they’re good for teenagers!” Regardless, while it did hinder us and continues to hinder us in a lot of ways, I think it definitely helped us as well.

=What are some of the favorite things that Fungi Girls have done as a group?

+Man, just being able to tour and release records is great. The fact that people all over the country know about us and we’re able to go play cities we’ve never been before to people that are stoked on seeing us. Outside of that, we’ve played with, became friends with, and/or have met a lot of our favorite contemporary bands from all over the world, which is really rad.

=What is the place farthest from Texas that the group has performed at?

=Any plans to play father away than that?

+We’ve always wanted to go on a European tour and play in Mexico but unfortunately haven’t had the chance yet. Hopefully we’ll be able to in the near future.

=I read somewhere that you all skipped some school to play a show with Shannon and the Clams. Is that true?

+Yeah, I believe it was in 2011 on a Tuesday night we drove down to Austin to play a show with Hunx and Shannon and had to skip school the next day. That was a great show and a fun night.

=Were their any teachers who were supportive of your musical careers?

+No, we all went to high school in small town Texas and for the most part always kind of kept our mouths shut about us playing in a band and what not. Most kids in our school and our teachers didn’t know we toured and had records out.

=What are your plans as far as future releases go?

+We will be releasing a cassette EP on Portland label Gnar Tapes and Shit called “Old Foamy” and are incredibly close to being finished recording our new record. At the moment the new record is untitled and we’re not sure who is going to release it yet, but we hope it’ll be out by fall 2014.

=Are any of the Fungi Girls involved in other projects that you’d like to mention?

+Jacob has a solo pop project called Vacations, Deryck plays bass with a friend’s band called Lazy Summer, and Deryck and I also have a hardcore band that is currently in the works.

=Are you familiar with McAllen or the Rio Grande Valley?

+We’re not incredibly familiar with the cities but we have all been down there and we’re really stoked to come down and play. We know it is (outside of San Antonio) essentially the birthplace of Tejano music, which is really rad.

=Top 10 Texas Artists, Present and Past:

+Oh man, that’s tough. I feel like Texas has made some of the greatest music in the world spanning across every genre so it’s hard to pick a for sure top 10, but here are some that immediately come to mind that I know we all love: 13th Floor Elevators, DJ Screw, Sunny & The Sunliners, Lefty Frizzell, The Dicks, Vomit Pigs, Selena, Blind Lemon Jefferson, UGK, and American Blues.

Appropriately, Fungi Girls are playing the Deep Secret Vol. 1 Cassette Release Show on March 11th at Simon Sez in McAllen. There will be artwork on display by the boys from Tuff Town. Openers will include The Sad Campers, PBLC, Pinky Swear, Vatican Beach, and The Puzzles. All of whom are featured on the cassette to be released at the show.

You can stream the cassette here.