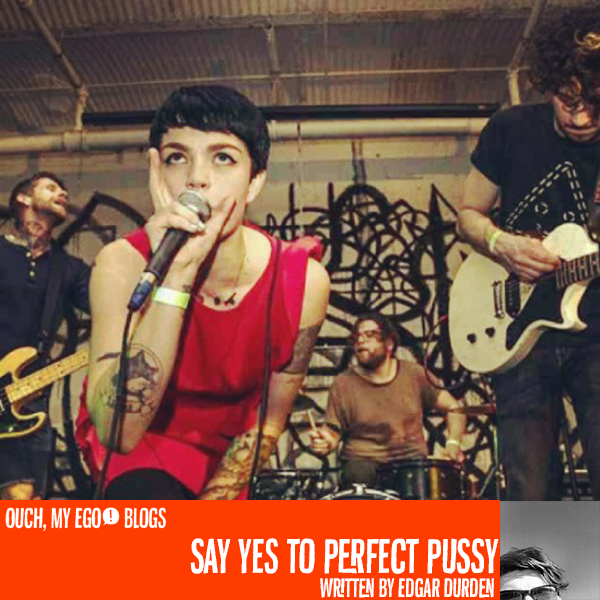 Confession is an old tradition in various religions. It is the idea that you can go to a sacred temple and spit out your darkest secrets and private tales with nothing in return but a good listener. I have not confessed (ever) or been in a church in almost ten years. However this idea is one that has always intrigued me, because I believe we all just want to be heard. Confession is exactly what Perfect Pussy does every single time they hit the stage. Front woman, Meredith Graves, shouts Jenny Holzer-like lyrics while the band produces a controlled chaos that serves as a beautiful backing to her ‘confessions’. This results in very intriguing music. Simplicity certainly isn’t Perfect Pussy’s cup of tea, mayhem might very well be it.

This past week I had a chance to chat with Meredith and Ray from Perfect Pussy about music, food, wrestling and everything in between. Read the interview after this video for their single “I”:

What is your reaction to all the buzz that the band has earned?
Meredith: I am super flattered and kind of perpetually freaked out. It makes me very nervous about whether or not I am doing a good job. But I’m having a lot of fun and I’m terribly curious about having nice experiences so I am trying my best to enjoy it.

Ray: The buzz has been weird. it seemed like it all just happened at once. For instance before any of this started i was still playing shows in my friends basements at which most people were only there to get drunk and didn’t give a shit about us, haha. So it’s strange having people come to our shows that we’ve never met and be excited to see us play or meet us, but I also appreciate it a lot.

Best reaction to the bands name? Worst?
Ray: The worst is probably the million of doofus jokers on the internet that have said, in regards to Meredith, “I wonder if she has the perfect pussy.” Or once someone asked us if we played christian rock music after hearing the name. The best response was from my dad, “how am i going to tell your grandmother?”

Meredith: The best reaction comes from people who think it’s affirming, or funny. The worst is my mom, who really hated it and told me that it personally offended her. That bummed me out, but it’s okay now!

You guys have been touring relentlessly for the past few months. How was it going back to your ‘regular’ life?

Meredith: I don’t have a regular life any more- and I don’t think I ever really had one to begin with! Since we started touring in November, I haven’t been in the same city for more than 4 days at at time, and that was only in Montreal and now Syracuse, and even then that was only this past week. I’ve been doing nothing but traveling for months, and I’m so happy. I hope this is my regular life now, because it’s so beautiful and exciting.

Ray: It was WEIRD. Like, going back to a place where you are actually familiar with where things are and not having to rely on others. It’s nice but very weird.

I always tell people that if I were a professional wrestler, my theme song would be III by Perfect Pussy. I was wondering what would yours be? Why?

Meredith: I actually love wrestling. That’s a huge honor. I think I would come out to “I Wanna Dance With Somebody” by Whitney Houston. And then get my ass kicked.

Ray: Mine would be That’s life by Frank Sinatra because i don’t think i’d be very good.

Meredith: My usual is “Rock With You” by Michael Jackson, but I also like “September” by Earth, Wind and Fire. I have a tendency to pick songs with long instrumentals, which allow for dance breaks.

Ray: I actually went to karaoke for my first time recently and chickened out before I sang but I picked a Bjork song. I forget which one. It was probably Hyperballad. So I guess that! Or “Flagpole Sitta” by Harvey Danger

Who has been your biggest artistic influence, and do you think said person would like your artistic output?

Ray: Marcel Duchamp has definitely inspired me the most I think. He was a surrealist/dadaist painter, sculpture, and photographer. He made sculptures called “Readymades.” The most famous being “The Fountain” which was made out of a urinal. Since then there have been performance artists who have tried to smash it with hammers and pee in it. He quit art later in his life to play chess and eventually wrote a book about it. I want to do the same thing but with music and billiards. Considering he was around 50+ years ago, I don’t think he’d be into perfect pussy. Well maybe he would. But more as a performance piece and less as a punk band.

Meredith: I have a lot of influences, from visual artists to musicians to friends and relatives. Everything I do is inspired by someone else, nothing I do is very original at all. Right now I am very inspired by hot glue guns (I got one when the craft store went out of business and I am always inspired to make crafts that involve hot glue guns, I really want to use it all the time because I’ve never owned one before) and people I am still friends with after being on tour for three months. It’s easy to lose touch if you’re like me and have a lot of acquaintances but few close friends, so the people who are still around, I am trying to move closer toward. Developing more intimate friendships is a huge inspiration right now, and I think most of my friends are proud of my artistic output!

If your labelmate (Captured Tracks) Mac DeMarco is the Bill Murray of music, right now. Perfect Pussy is the…?
Ray: Joaquin Pheonix sounds about right.
Meredith: The general consensus among the troops is Harmony Korine.

What is the most exciting aspect of playing in South Texas for you?
Ray: Tacos. Tacos over everything.
Meredith: Migas, really. Every morning. I am also really excited to be outside without a parka on, because this winter has been absolutely horrible and freezing.