Here we go with another two-fer, folks!

The two films discussed in this episode of Vincent Price’s Laugh are remarkably similar, however retaining distinct differences. They’re both “siege” films in their own ways, both involve the confrontation of an unknown entity, and both pose pseudo-philosophical questions about the very nature of good and evil.

We’re talking about Let Us Prey and John Carpenter’s Prince of Darkness. Set in a small town in Scotland, Let Us Prey tells the suspenseful, compelling, and sometimes gory story of a young woman’s (Pollyanna McIntosh) first night on the job of the local police force. Something spooky is going on in the town, as evident by the, well, lack of people in the town: The gas station attendant is missing; the pub is empty. It seems as though the only people around are those gathered in the small police station. Added to the eeriness is the presence of a mysterious stranger (Liam Cunningham) who has been locked up for questioning, but does most of the actual questioning himself. Who is this man, and is he somehow pulling the strings of all the night’s events? One thing is for sure: he is in the business of dealing souls, and is most interested in that of our heroine.

Let Us Prey is the first feature directed by Irish filmmaker Brian O’Malley. With a smart script by Fiona Watson and David Cairns, the film is one of the most satisfying lower-budget horror movies to be released in recent years. We’re looking forward to O’Malley’s next project, The Lost Station, a ghost story set in the London Underground. Prince of Darkness is the middle episode in John Carpenter’s “Apocalypse Trilogy,” the other two being The Thing and In the Mouth of Madness. What makes this film distinct from the other two is a lack of “creatures”; rather, any monster seen is in human form, be they shrouded in darkness or puppeted like a voodoo zombie. As mentioned above, this film explores the nature of evil, via science and philosophy (by way of a catholic priest and a college professor and his students).

It’s a slow burn for sure, but when it hits its stride, it glides – almost rushes – to its conclusion, which is bound to make you want to re-watch the film lest you missed something. Most likely you did miss something. Or, Carpenter did…someone did. But this is a film of atmosphere and philosophy. A hint of Lovecraft, a smattering of Christian concepts of the devil – all seen through Carpenter’s ambitious lens.

Check out what Elbee and Andrew thought of these films and more by tuning in every other Monday for Vincent Price’s Laugh! Subscribe on iTunes (or your favorite podcast app), and leave us a rating or review. Follow us on Facebook or Twitter! 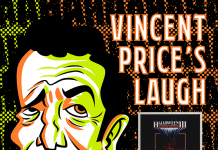 HALLOWEEN III: SEASON OF THE WITCH