The Film: Dr. Otto and the Riddle of the Gloom Beam I was never an Ernest fan*. I was in my tweens when Ernest P. Worrell came to my attention via adverts on TV – and then, the Ernest Goes to Camp movie. I never had any interest in that – or most any other camp movie at the time – on account of not enjoying the whole mandatory-fun-via-exile-with-strangers that summer camp was for me. My only true Ernest film watching experience was Ernest Goes to Jail, of which I have very little recollection of now, but I do remember enjoying – in a visual sense at least. Throughout my many years on this planet, I eventually saw and, to some extent, enjoyed the various works of Jim Varney (Ernest himself). And while I’ve seen him play a few other characters in other films (such as a carnie in Wilder Napalm and Jed Clampett in The Beverly Hillbillies), it is here in this newly-discovered-to-us film where my guest Elbee and I learn that, in spite of not being a great (or even good) film, Jim Varney has great command over his voice and performances. It would behoove you to find this film any which way you can, so you can enjoy (or be perplexed by) the many characters that Varney portrays: Dr. Otto, Rudd Hardtact, Laughin’ Jack, Guy Dandy, Auntie Nelda and, of course, Ernest P. Worrell! You’re bound to have a few favorites and a few questions…We’re here to attempt to answer them, maybe.

*I am now a pretty big admirer of the late and great Jim Varney. 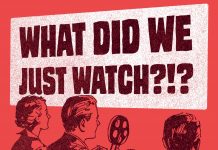 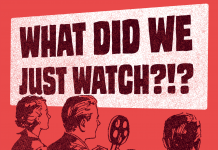