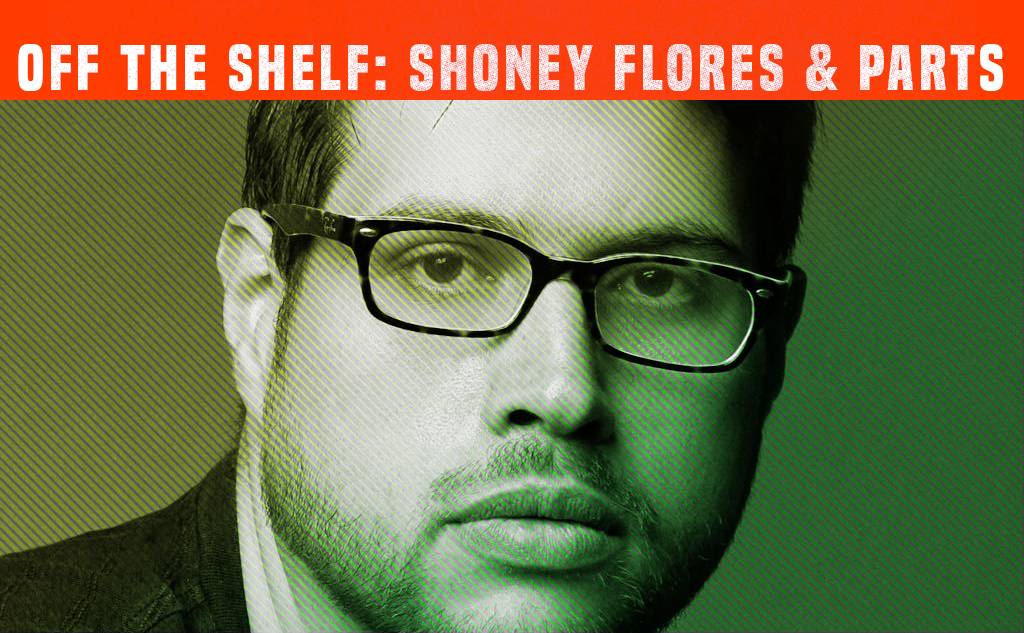 We are what we behold.

The protagonist of Shoney Flores’ debut novel, Parts, falls prey to this phenomenon. Though he fights to rise above his environment, he unconsciously blends in. Each chapter chips away at him impartially until they reveal the simple nature he was so prone to condemn. Flores’ novel takes place in only two settings: an auto parts store where the main character stocks and ships merchandise, and in a writing workshop at his university. Both settings are used as a backdrop where characters and Valley-isms are dissected into parts and put on display. There are parts about sexism, about religion, about literacy, about chisme, about pride, about choices. Through these lenses the narrator colors the pages with a cast of characters that are quintessentially RGV. They are people we’ve met: people from work, from class, from the bar, from the last quinceañera we attended.

The protagonist’s auto-store is stocked with men, desperately trying to prove (and discover?) their manhood by feminizing each other. Their ridiculous and raunchy attitudes are both funny and explosive and keep the reader invested in their stories as we watch them fall from their own stardom to uniquely unoriginal.

That being said, it’s not as if the characters are simply stereotypes of vague and nameless people we’ve seen in our little corner of the world. This isn’t another day-in-the-valley novel. Flores has a god-given talent in realism as enacted by his main character’s dark humor, and he excels in uncovering the complexities of his characters, even leading the reader to empathize through the narrator’s critical eye. We might have nothing in common with these machismo men, but Flores shows us the consequences of assumption without really understanding other people. The narrator brings us close to the cast (close enough to see his reflection in their eyes) in a search for his own masculinity. By the end of the novel, it seems the narrator has everyone figured out but himself.

The setting of the academic world is vastly different. In his writing circle sit an artsy but equally insecure group of novice writers. When the first scene-change happens, you are tempted to find salvation in a university setting, but the truth of irony soon emerges: ignorance and wisdom are found in unlikely places. You wonder and hope the narrator will realize that, too.

Flores writes experimentally, sometimes blurring the lines between dialogue and thought, public and private discourse, sarcasm and truth. This existential tool keeps the reader as much absorbed by the form as by the plot. The skill in Flores’ development of such authentic characters and beautification out of the seemingly mundane scenes is engaging and consistent. You’ll gawk at, sympathize with, exonerate and convict the cast reading their stories.

Parts is Flores’ first published work. Though most authors go through a string of sub-par paperbacks before finding their unique ink, Flores writes in a truly original voice. One can only assume this was a novel years in the making.