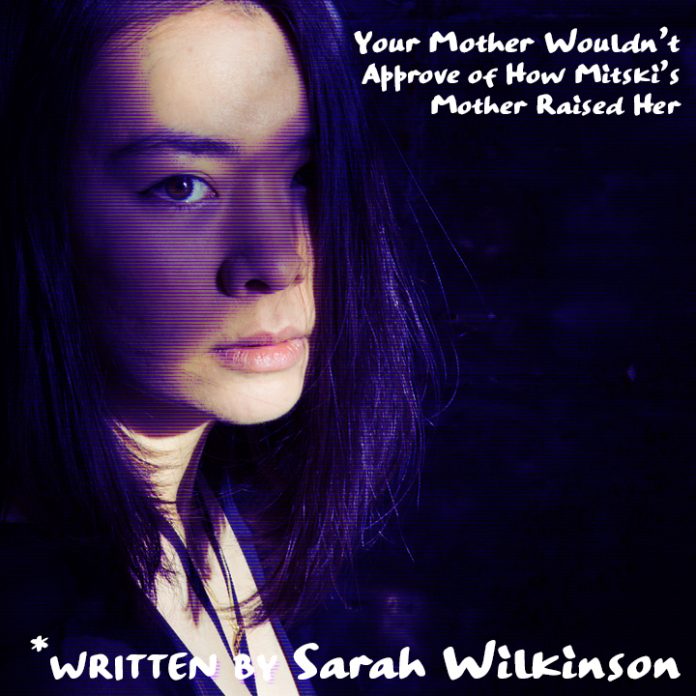 Mitski is a timeless piece of work.

She is only 26, and yet she brings a raging vintage vibe to the musical table. Listening to her work, one would assume she’s at least twenty years older that what she really is. Millennials like she and me just barely missed indie greats like Sonic Youth, Pixies, and Neutral Milk Hotel (well, missed experiencing them as they happened at least). In my opinion, there’s not much that can hold a candle to the late 80s – 90s indie music, so obviously I’m a bit miffed that I’m too young for the genre. (In high school I wished I had been born ten years earlier so I could have enjoyed Weezer’s Blue Album when it was initially released.) But I have found in Puberty 2 what I didn’t get to take part in culturally the first time around. Recording the album in just two weeks, Mitski and her collaborator/producer Patrick Hyland kept Puberty 2 to a minimalist road. The songs are not terribly long – over half of the tracks are under three minutes. The songs are also not terribly complex, as it’s fairly obvious that this album was written by a one-woman-show. Would you believe that “Dan the Dancer” is almost made up of only two chords? And that “My Body’s Made of Crushed Little Stars” is essentially just her and her guitar? The economical use of instruments as well as musical form is masterful. I believe the simplicity of this album allows for the listener to grasp better Mitski’s emotional message. She isn’t here to waste our time with extra fluff. Mitski gets her point easily and succinctly.

On first listen, I thought I had stumbled onto a St Vincent album. She delivers her opener “Happy” with a similar vocal delicacy and unique funkiness to that of Annie Clark. “Happy,” as well as several of the tracks that follow, seem to break from the trends of current songwriting: harmonies and chords clash instead of blend, rhythm is loose and not strict, and (God bless her) there is no Auto-Tune.

One of the reasons I enjoy listening to Mitski is that her singing voice is stunning. No matter what’s happening instrumentally, her voice floats beautifully on top of everything. The best examples on the record are “Fireworks,” “I Bet On Losing Dogs,” and “A Burning Hill”. Along with Annie Clark, I’d stick Mitski in a vocal camp with Debbie Harry, Sara Jaffe, and Laura Marling. If she gets a bit too weird instrumentally for you, let her singing voice influence you; you’ll feel better. This leads to a beautiful combination of the hard and soft on Puberty 2. Her lovely soft voice is a passenger while her rough compositions drive everything home. Case in point, “Thursday Girl” instrumentally feels like a raucous night out, and yet Mitski sings it as if she’s singing to you alone in her bedroom. “Your Best American Girl” is another interesting juxtaposition. She is lovely and unraveled at the same time.

Mitski gives a lot, but I can’t help but wish I could have more. I’d love to hear “My Body’s Made of Crushed Little Stars” kick into gear in a full band setting. And I desperately wish “A Burning Hill” was longer. However, at the end of the day I have to accept that this is what Mitski is willing to give. Puberty 2 is done on her terms, and you have to take it or leave it. I don’t think she cares what you do either way.

Mitski is performing in McAllen at Yerberia Cultura, Sunday, May 7th. This will be a benefit show, where 100% of the proceeds will go to the South Texas Human Rights Center. Texan artist Jesika will be supporting. Side note: though she has little presence outside of the local music scene, Jesika is most likely an act you’re not going to want to miss. She has a similar “don’t care” spirit of roughness to that of Mitski. Reportedly, Jesika was asked to join the Texas leg of the tour even though she is relatively unknown. From the research I’ve done on her, I’m fairly certain she’s going to be one of those acts you will boast about seeing before she made it big. Make sure you see this show.