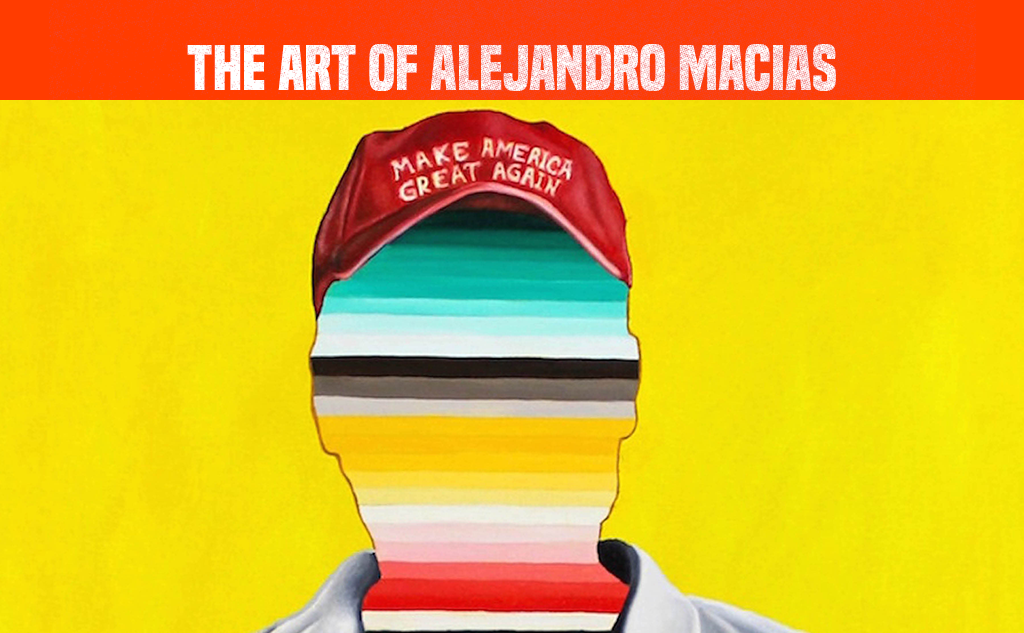 One look at Alejandro Macias’s work reveals the border tensions we are all too familiar with in the Rio Grande Valley. The bi-cultural dichotomy is evident in the synchronicity and competitive portraits of our lives along the wall. Although these expressions represent his hometown’s environment, they were only recently formed by an inspiring trip.

Macias’s latest pieces derive from the chilly Atlantic winds of northern Vermont from the winter of 2016. Macias, a native to Brownsville, Texas, had only lived outside the Valley once in his life (spending a year in San Antonio). But when the opportunity to attend the month-long prestigious Vermont Studio Center presented itself, he packed his bags and headed for New England.

“It was nothing I had ever experienced before,” he told OME. “I had grown so accustomed to being part of an ethnic majority that I felt out of place.” Most of the other writers and artists were white, writing and painting about north-of-the-Valley issues. “I was kind of lost at the time, artistically anyway. I didn’t feel I had a direction with my work.” Luckily, there was a breakthrough. “Vermont really inspired me, specifically the other ethnic artists I met. I guess we shared more in common than I had thought. Plus, they were doing some really edgy stuff.”

He returned with a sense of vision, of direction for his work. But it was not without challenges. “Many people in the Valley are exposed only to a very traditional style of art,” Macias said. Think of sun-bleached landscape paintings hanging near the back door of a ropa-usada, or the Last Supper in a gold gilded and gaudy frame over abuelita’s rose-print couch. For Macias and other artists in the Valley, contemporary art is a hard sell. “Most people don’t think of contemporary art as art. ‘My kid could draw that,’ they say. Unfortunately, that’s still where we are.” Expression for an artist like Macias opens itself up to misinterpretation and a lack of appreciation. Thus spawned the unique style of Macias’s work. The idiosyncratic allure of his paintings comes from the juxtaposition of both “traditional” style and contemporary. They split the canvas into two discrete pieces connected only by the thin border, as thin as an iron fence you might say. Consider “Nopal en la Frente,” where we see a contemporary impressionist’s rendering of a bouquet of nopales exploding from the center outward. Adjacent to this is a graphite drawing of an individual’s body with detailed shading showing wrinkles in his shirt and hair bristling on his forearm. In dichotomies like this one, Macias fuses the art of both worlds: the world of his culture, full of traditional values and conceptions of art, and the new world of ideas expressed with bright, bold colors and heavy-handed brush strokes breaching predefined lines and meanings. Macias’s border-themed expressions are not always so direct as “Nopal en la Frente”. One of his most recent works, “Puro Pinche Republicano,” is a portrait of man wearing Trump’s “Make America Great Again” cap and a white polo with the Republican’s Elephant embroidered over the heart. The man’s skin, however, is made of a multi-colored zarape, whose lines both hide and magnify his skin.

Macias demonstrates the depressing enigma we find on the border: the proud Trump voter who is also ironically Latinx. Though Republicano is in the title, it is clear this not simply the “pull yourself up by your bootstraps” type of Republican; Macias is highlighting the curious hypocrisy of the Alt-Right chicano, and exemplifying his uniqueness through the thick and lucid stripes of the traditional Mexican garb. Such different sets of values are curiously fascinating when they join, both in Macias’s work and in life.

Macias’s voice is an echo of a true border phenomenon: the divisions and unification of two peoples, two sets of values, two interpretations of reality. Where they join, we find an artist discovering himself in the blurred lines of where he comes from and where he goes.