I always take it as a great compliment when people are influenced by Texas.

This seems to be the case for the most recent Miniature Tigers album, I Dreamt I Was a Cowboy. Whether it was songwriter Charlie Brand’s stay with Texan friends after a breakup, or just the call of the melancholy honky-tonk sound that helped flesh this out, we now have a really great album on our hands. I’ve read some people call this record “unfinished” and “raw”. Personally, that is not at all what I hear. To me, this record was meticulously pieced together. And though Brand reportedly built his demos in the living rooms of friends he crashed with (apparently not even re-recording a lot of the album, but keeping the original demos intact as he mixed and mastered), each track is planned and executed very well. Since Brand is also an accomplished painter, this makes sense. A good artist carries out his vision with careful skill – no matter what tool he uses (I have to admit, I imagined Brand plonking everything out in Garageband. In fact, he has said he used Ableton.).

Most of the songs are heartbreakers, but if you don’t pay attention too closely to the words, the record doesn’t come off that way. Musically speaking, it’s all pretty sunny, while lyrically, he’s a “gothic in the daylight”. What a fantastic line from “Crying in the Sunshine” – and there are a lot more fantastic lines on this album! Brand’s lyrics aren’t terribly complicated, but he gets a lot of power through to you in the words’ effortless simplicity.

One thing I love in a band is when they make stuff that is a) incredibly sing-able and b) incredibly dance-able. I know some will fight me on this, but honestly – what else is the point of music if you can’t sing or dance to it? Miniature Tigers do both so incredibly well. Don’t believe me? Go see them live. People unashamedly sing and dance to all their tunes. That’s a great measure of success in my book. Get people movin’ and groovin’: that’s a band worth listening to (or worth seeing a live show or two).

I have two big favorites from I Dreamt I Was a Cowboy. “Crying in the Sunshine” is one of them. This is a fantastic song with a great groove. This track makes me thankful that there are bands that exist that can still make stuff worth dancing to. I can’t tell you how tired I am of going to shows with an audience of people that simply gawk at the stage. How boring.

“Nobody Else” is my other favorite track. Brand drew influence from a ’60s singer named Millie Small, and you can even hear her voice sampled on this song. There is a fantastic power and strength in the story of this track. I would even go as far to say that the album’s heartbreak theme could be summed up nicely with this song. Just wait til you get to the bridge. Brand drops the key as well as his voice, making things get real serious real fast. “Didn’t I give you all of my love?” he sings. Let’s just say he knows how to get his point across.

Thankfully this isn’t one of those albums with a couple of decent singles. All of the tracks are consistently great. “My Girl Forever” was a nice flashback to what I was listening to in college a decade ago (Blitzen Trapper, Islands, Animal Collective, etc). This was a nice throwback to how I first knew Miniature Tigers in 2009. The opener is a sweet, positive, and hopeful track. Brand’s voice is intimate and close sonically (you could almost see him recording right up against a mic in a friend’s living room – trying to not sing too loud to disturb anyone). I like to think this was the last song he wrote for the album, and that he put it as the first track so as to say he’s moved on from all the grief you’re about to hear. Best line of the song? “My eyes could never forget you, Mae.” Swoon!

Speaking of Mae, “I Dreamt I Was A Cowboy” was sung by the frontman’s girlfriend, Mae Whitman. Hats off to you, Mae – what a beautiful voice! I say ‘thank goodness’ for this song for two reasons: we finally get an actress AND songwriter’s girlfriend who can sing well (this does not always happen). Whitman has a sweetly controlled warble to her vocals. I find her singing to be absolutely lovely and very appropriate – not only because it’s the title track, but also it’s the track with the most vulnerability to it. Honestly, I wish it were longer. How about a little side project for us, guys?

Overall, I Dreamt I Was a Cowboy is an amazing album with lots of gems tucked into it. I’m glad these guys are still going strong after so many years in the business. I say get out and see these guys live so you can sing and dance along with them.

Miniature Tigers are performing in McAllen at Yerberia Cultura, this Friday, February 10. Joining the band on their Texas tour is Sam Turner & the Cactus Cats. Supporting them locally will be favorites Quiet Kids and Pinky Swear. Editor’s note: This show will sell out! Get your tickets early, kids! 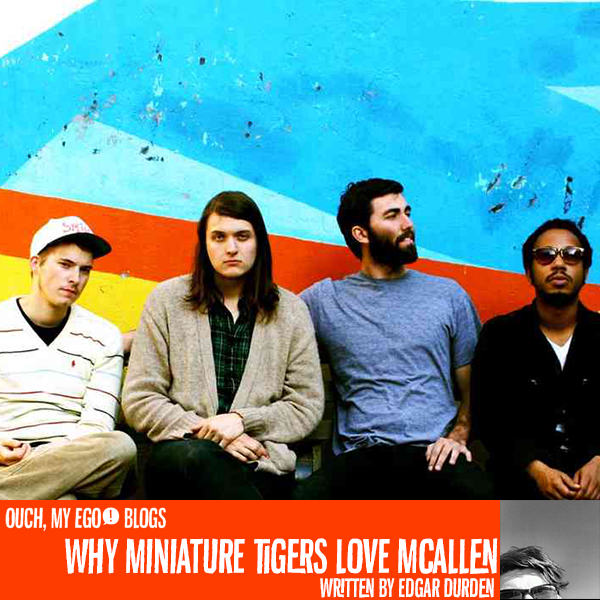