This episode is a long time coming. Over a year ago, we set out to do a show on 2015’s Poltergeist by itself. However, as we discuss in this show, it’s not exactly possible to examine a remake without the original film entering into the conversation. So we decided to put the idea of the episode on the back burner for a while, and regroup our thoughts. You know, years ago, if you asked me what my favorite horror film was, my answer would undoubtedly have been the first Poltergeist. It’s the first scary movie I can remember watching, and it did have a substantial effect on me. The film helped shape what I’m interested in (as far as the paranormal goes), and what I am afraid of (In this episode, you’ll hear a little more about that – and it may not be what you expect!). But after many repeat viewings through the years, I began to see some problems with the film – just minor annoyances – and, although I still have a particular fondness for it, I’m not totally sure I can muster as much passion for it as I once did.

So, when the announcement was made that Poltergeist was getting a new treatment, I didn’t have too much of a problem with it. After all, remakes weren’t so out of hand at the time, and I had enjoyed the last couple incarnations of Texas Chainsaw Massacre, The Hills Have Eyes, and Fright Night, so I was pretty interested in seeing what could be done with a modern update of my childhood favorite film. But then the studio released the trailer, and it didn’t seem like anything to write home about, so I thought why even bother going to see this thing in the theater. After some lackluster reviews coupled with the remake stigma, I don’t think this film really found any kind of audience. And, although I wasn’t one of the group who refused to see it on principle, I just…didn’t make it a top priority.

But, whoa! Call me crazy, I really enjoyed it! After watching the 2015 Poltergeist, I started asking questions about the original that I hadn’t thought before; I was able to think clearly about it, and realized there are holes in it that have to do with character development and plotlines – holes that are covered oh-so-skillfully with a Spielberg-shaped bandage. And, as much as the purists may not want to admit it, these holes are addressed (and some even improved upon) in the remake. We go into more detail of that in this episode, touching on topics like representations of masculinity/femininity and the family unit.

So please sit in with us as we discuss 1982’s Poltergeist and 2015’s Poltergeist (Please note we refer to the 2015 film’s extended cut). We do address the public backlash and general negativity surrounding the remake, because, when you give it a real chance, it’s not a bad film whatsoever. Actually, it’s a good film.

As always, thanks for listening! If you would like to support us, please take a quick moment to like us on our social media sites (Facebook, Twitter), and remember to rate and review us on iTunes. You can also become a patreon patron here, or buy some cool merch designed by our very own Andrew Gimetzco at places like these: RedBubble, Society 6, Tee Public, Threadless. 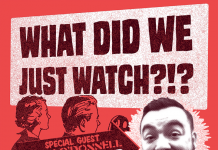