the film: My Boyfriend’s Back

the guest: Mitch Ansara, aka Spacesick

The early ’90s were in a dire state when it came to teen cinema. Sure you had your tween hits like Home Alone (barf!) that most all ages enjoyed (Really? HOW?). However, when it came to coming-of-age teen comedies, there just wasn’t much out there. But here we exhumed one just for you, called My Boyfriend’s Back. It’s a tale of unrequited love: An awkward teen named Johnny Dingle (I mean, REALLY?!?), pines for, but fails to grab, the attention of his longtime crush. The slightly charming (but indeed awkward) Andrew Lowery plays our hero Johnny, alongside Traci Lind as the lovely Missy McCloud. Since our protagonist is a textbook goober (something I relate to all too well), his options are limited, and the big dance is coming up! So he hatches a scheme to impress his beloved. It just so happens that this scheme inadvertently kills him. But as he lay there taking in his last breath, Missy agrees to go to the prom with him, because, let him die happy? I guess?

It’d be a short movie if it ended right there. But it doesn’t! Johnny rises from the grave to no one’s actual surprise. Oh, right, this is a comedy. Johnny is intent on going to the dance with Missy! His own death won’t even stop him, but the zombie-phobic townsfolk might! A slightly mad, scientist might! Johnny’s refusal to eat people might! What’s a guy to do?!?

Veteran actor Bob Balaban (that’s a fun name to say!) directed this film, which features the acting talents of Edward Herrmann, Mary Beth Hurt and Paul Dooley, among others. And, a few notable actors made their first big screen appearances in this film: Matthew Fox, Philip Seymour Hoffman, Matthew McConaughey, and one that was even left on the cutting room floor (tune in to find out who!).

Digging through the remains with me is Mitch Ansara (Spacesick) who, apart from being a lauded illustrator, (one whom I’ve learned a thing or two from in the years that I’ve known him) is also a humble but talented music producer (you’ll even hear some of his tunes beneath the amicable chatter of this episode). I must confess, though, in this episode I mention NOW Comics when I should have mentioned Continuity Comics instead. Please listen to and enjoy our post-mortem of My Boyfriend’s Back. 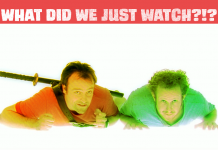