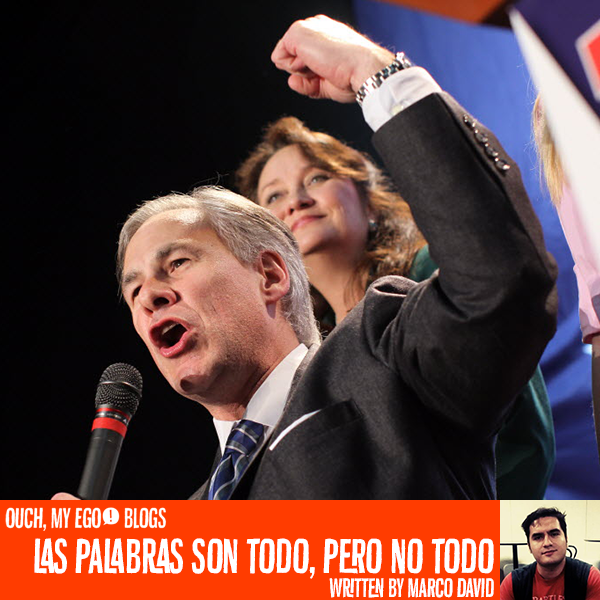 Words can build bridges, and burn them just the same. They help people connect with each other, yet they can also push and shove, sometimes in the most offensive of ways. Words are everything, but in the end actions speak louder. This is why Greg Abbott’s recent comments during his latest policy proposal in Dallas about South Texas corruption being ‘third world’ doesn’t bother me as much as his plans to cut $5 billion in education spending if he is elected, or the fact that he wants to spend $300 million in over the next two years on border security, but that’s just me.

Now, let’s keep in mind that we live in a free and open society where the First Amendment is sacred, so Greg Abbott clearly has the right to express his ignorant rhetoric, even if it characterizes South Texas as a war zone that is in need of a law enforcement revamp and political enema. I mean, just take a look at the current trial of Armando Villalobos, a high-profile target in an FBI investigation into corruption in Cameron County.

This is a guy who is a former top prosecutor who was responsible for putting many away for heinous crimes, and now he is facing extortion and racketeering charges himself, including helping a convicted murderer escape following his trial. The convict hasn’t been apprehended since.

A jury last fall also found a former Hidalgo County sheriff’s deputy guilty of conspiracy to possess with intent to distribute a thousand kilograms or more of marijuana. Prosecutors in that case claimed Jorge Garza took drugs from smugglers and resold them to traffickers. That guy now faces a minimum of 10 years in prison.

The number of former law enforcement officers who have pleaded guilty in connection with the case continues to grow. Many of these men were members of a drug flying squad known as the Panama Unit, now defunct.

To a certain degree, all of this only elevates Abbott’s claim, yet the way he called out this regional problem was poor tact on his part, using terminology that many found insensitive. Everyone from his opponent Texas State Senator Wendy Davis to State Rep. Terry Canales (D-Edinburg) called on Abbott to apologize for his remarks.

In the game of politics, words are all you have to stand on, and this man clearly lost his edge with garnering a large chunk of the Latino vote. He doesn’t care about this though, and even defends his statement because he is more interested in elevating his right-wing base. But that’s ok. Texans will make their decision soon enough and decide whether surveillance and boots or education, better housing and job opportunities are what this state needs. Food for thought: Let’s not get hung up on words, but actions.