The concept of a musical ‘super group’ may be tired. Most of the time when bands are made up of prominent members of other bands, in some way or another ego gets in the way of the full potential of the project. Tensions may build, songwriting styles may clash – sometimes there is just a simple lack of chemistry between the ‘super’ performers that hinders the development of a truly great band. But for every Velvet Revolver, there is The Postal Service. Continuing in that latter convention — the one that says some super groups are still interested in creativity, exploration of ideas, and, above all, producing exceptional music — look out for the Valley’s own Slow Attack.

Made up of local rock scene veterans, Slow Attack began playing together back in March. The lineup includes Rob Godinez (No Trauma, Blocked Numbers, The Young Maths) on synth and vocals, Manny Montejano (The Young Maths) on bass, Andres Sanchez (Dandy Heat, Super) on guitar, and Eric Vasquez (Belts, Good Ghost) on drums. “It started as something fun to work on with no real pressure to play a show or finish anything,” says Rob Godinez. “We’re all friends, so I figured at worst we’d try it and find out we didn’t gel together. At best, we’d come up with some good music that our respective projects couldn’t do.”

The resulting band is a blend of diverse tastes and different approaches to making music, each song starting from scratch with the members working together organically to create something new. Rob describes Slow Attack’s songwriting process as “democratic,” with each member contributing ideas. “One of [the songs] came from leaving a drum machine on,” he explains. “Eric added an accent that led me to hear the main two-note movement the song was built around. One came from a bass line Manny started that we all just built over in a few minutes.” It’s from that sense of songwriting democracy that the band’s unity has emerged. He adds, “None of these songs would have gotten written if we hadn’t been in the room together.”

Further, Rob is quick to attribute Slow Attack’s rhythm section as being one of their main strengths. “Eric and Manny create a tight foundation for me and Andres to paint over,” he says. “We’re tight without sounding robotic or repetitive.” It’s a kind of ‘determined recklessness’ that factors into the band’s fresh and unique sound.

“Writing face to face with each other has pushed each of us into new territory. Andres has said we moved him out of his comfort zone on guitar, which I think is great. It has moved me out of my comfort zone of writing and recording alone, so it’s good to be back bouncing ideas off three people. ”

Each member of Slow Attack brings his own energy to the group, developing a dynamic that is somewhat hard to describe – the closest is probably post-punk. Drawing from punk ethics and an appreciation for the experimental and avant-garde, Slow Attack is almost esoteric. Rob wouldn’t be surprised if listeners were a little confused at first. “All of the songs are so different,” he says. “We started learning a Duran Duran song, and it didn’t feel out of place…I would like this to be music you can think to – or flail to.” With raucous guitars, heavy rhythm, and calculated synths, there is a definite nod to the unconventional in Slow Attack’s sound. And, as quirky as it seems, Slow Attack is heavily influenced by — wait for it — James Brown’s mustache. Rob offers this explanation: “If you look up YouTube videos of James Brown performances, he goes way harder when he has that mustache. It’s controlled and chaotic, and that’s what we want to be.”

Slow Attack will be playing their first live show at local dive Yerberia Cultura’s one-year anniversary party. The significance of this event ties in to the bold ideas that came to life in the formation of Slow Attack. Rob points out, “Yerberia has been such a great center for our music scene, but it didn’t just appear out of thin air. I mean, Patrick [owner of Yerberia Cultura] went from being a guitarist to booking shows to being a venue owner. It’s a continuation of that theme of being pushed out of your comfort zone and rearranging existing pieces to make something new.”

“I feel that [the Valley music scene] is going stronger than ever.”

The ability of a community to come together and break certain boundaries collectively is something that Rob and many like-minded others love about the music scene in the Valley. And that sensibility won’t be changing anytime soon. “Even though I don’t go to shows as much, the amount of performances I’m missing is kind of breathtaking,” Rob says. “People are going to these shows, so it shows how many styles and tastes are being represented. It’s become more organized and fruitful, and I sincerely hope the city doesn’t try to suffocate it at such a crucial point in its development.” Clarification 8/7/16: The bands listed as credits for the members of Slow Attack are meant as a reference for past work (in the last 5 years), and may not necessarily reflect current projects. 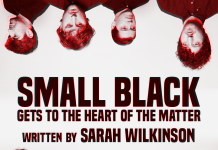 Small Black Gets to the Heart of the Matter