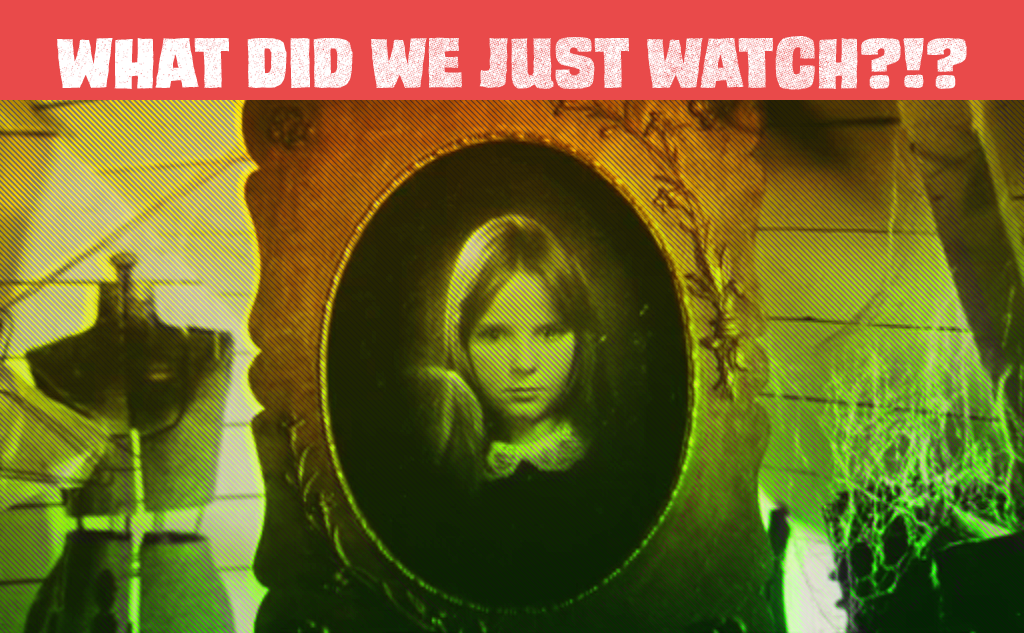 In this episode, Elbee and I discuss the 1977 film Cathy’s Curse. Oh, you’ve never heard of Cathy’s Curse? Well, neither had we until very recently. But what I heard is that it’s a “totally weird and insane” movie. So of course I just had to seek it out (thanks to OME’s own George Dean, we got our mitts on this “bell and whistles” blu-ray release from Severin, and by the way, the same cleaned-up print is also streaming on Amazon Prime — as of when this podcast was published.)

The bare bones story is simple: a family moves into a new-to-them house, and the daughter begins to inexplicably behave strangely at the influence of a creepy dolly, or maybe the portrait of the father’s dead sister? Whatever the influence, “inexplicable” is certainly an adequate descriptor as none of the mayhem that results seems motivated in the slightest.

Going in, we expected wall-to-wall weird, but what we got was somewhat run-of-the-mill “possessed girl” antics, however with lots of head-scratching confusion. But there may be reasons for this strangeness beyond the genre: the director is a Frenchman, and the crew hardly spoke any English. So as my theory goes, there’s something lost in translation, as the cast is all English-speaking Canadians.

And it’s not that this isn’t a weird film; it is plenty strange. But it isn’t exuberantly insane, as I was lead to believe, and thus, we sound less than impressed. And as always I do suggest you watch the film before you listen to this episode, as you’ll be right there with us, scratching your head as we scratch ours.