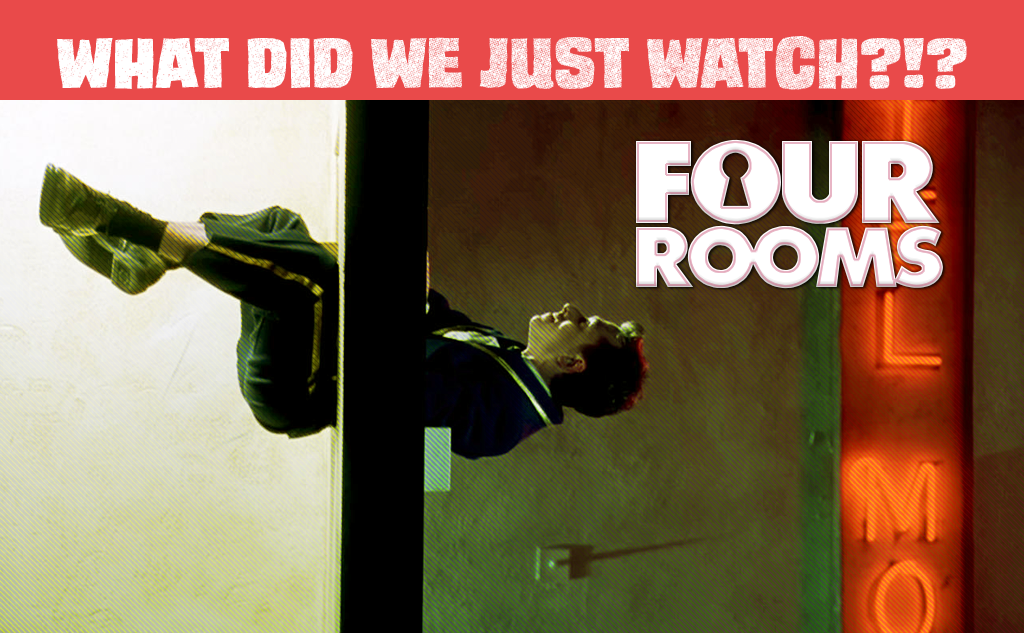 The new year is upon us! And that means, for perhaps regular podcasts, we’re due a “Year End Special”. And while it’s very tempting to do so as a tradition, I think we’ll probably just have this be a one-off episode featuring a movie that takes place on New Year’s Eve: Four Rooms.

Unlike most anthologies, Four Rooms features a single character, Ted the Bellhop (played by Tim Roth), in common with every vignette presented to us. In the first segment by Allison Anders, “The Missing Ingredient,” Ted services a coven of witches in more ways than just room service. The second segment by Alexander Rockwell, “The Wrong Man,” features Ted entering the wrong room and enduring a pulpy film noir-style lover’s spat gone off the rails. The third segment by Robert Rodriguez, “The Misbehavers,” actually takes place interlaced with the second segment, but is presented here as its own short about two kids left alone and the hi-jinx that ensue while their parents visit a party on another floor. And the fourth and final segment is “The Man From Hollywood” written and directed by and starring Quentin Tarantino as, more or less, himself.

Now, how is this a strange film? Is it the format? Is it the tales themselves? Or perhaps it’s Tim Roth’s performance? Hint: it definitely IS Tim Roth’s performance. Tim Roth is so spastic, so strange like he’s holding onto a live wire trying to not wriggle due to its current charging through his body, but he’s failing to do so. It’s like he has to go pee really urgently. But that’s just the start of the strangeness. Some stories are weirder than others, or quirkier. Additionally, Marisa Tomei’s moment in the film is brief, but delightfully daft.

And here, our junior cinefile Jon had never seen this film. So I had to remedy that, and quick! So here, a film I view semi-traditionally, every other year or so on or around NYE, and Jon’s unfamiliarity with it, yields us this episode! Four Rooms, oh won’t you join us?