Ouch My Ego! – Music, Art, & Culture Blog of the Rio Grande Valley
Home Podcasts What Did We Just Watch?!? I WOKE UP EARLY THE DAY I DIED 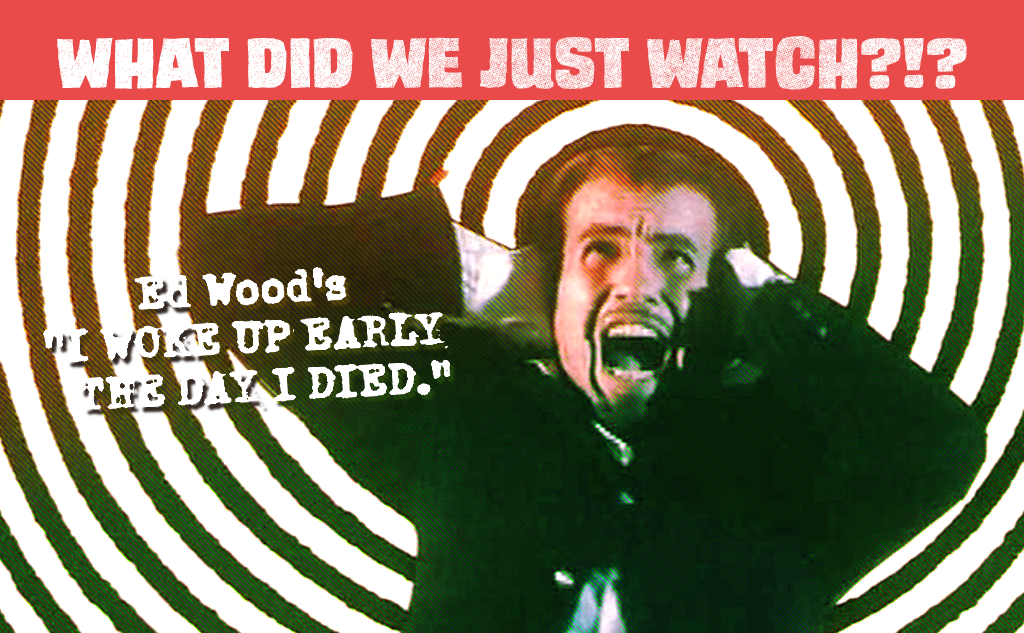 The Film: I Woke Up Early The Day I Died I’ve held off watching this film for just the right moment. I’ve had a copy in my possession for years (since 2008), but I never made a moment to view it. You see, I Woke Up Early The Day I Died, is the last film produced from an Ed Wood script. “Ed who?” you ask, and at once I both pity and understand you completely. In 1994 Tim Burton made a film called ED WOOD, about the life and career of writer/director Edward D. Wood, Jr. This film was very well received by film geeks of the day, but has, of late, fallen by the wayside. By the late ’70s Ed Wood was considered the worst director (from the ’50s/’60s) to come out of Hollywood. But this can’t be true – at least today, it isn’t. But this is a film-maker of yesteryear, and hardly on the lips of current film geeks and nerds with their Avant-pop and Criterion Collections and their amazing ’90s retro-themed throw-forwards. Yet, he became beloved, posthumously, when Burton directed his loving tribute to a very specific moment in Wood’s life. However, the script of this film was not even mentioned in ED WOOD.

The script for I Woke Up Early The Day I Died had been in and out of various director’s hands intermittently for years, but every director wanted to change the script in some way or other, so they were denied. That is, until director Aris Iliopulos met with the late Ed Wood’s wife, Kathy Wood. After the meeting she was convinced that Iliopulos would do the script justice. IWUETDID stars Billy Zane as a thief and murderer who escapes a mental asylum while dressed as a nurse (though he does change outfits). He robs a bank, hides his loot in a coffin, and later finds his loot to be gone! So he hunts down the mourners of the funeral* (*see coffin), and dispatches each one until he retrieves his plunder. It’s a thin story, made strange by the fact that there is no dialogue in the film. It’s not a silent film, however, as there is music and ambient and environmental sounds throughout. Stranger still, is the sprawling cast that includes but is not limited to, Christina Ricci, Eartha Kitt, Will Patton, Ron Perlman, Karen Black, Tippi Hedren and Twin Peaks‘s very own Giant/Fireman: Carel Struycken. Finally, having found the right moment, and the right guests with whom to share this viewing, we have for you our latest episode.  Elbee, you may already know, but Adrianna is new to the show, but not new to Ed Wood. Adrianna is a writer and musician and a connoisseur of schlock. So prick up your ears, and delight in this discussion about I Woke Up Early The Day I Died.

For a deeper dive into the film, please click the following link: MORE ABOUT IWUETDID