Cinema has had a rough go of it adapting video game properties to film. Even the most enjoyable of those are oft seen as problematic (for various reasons).  One such film was 2005’s Doom starring The Rock and Karl Urban. It’s a militaristic sci-fi yarn that plays on an “aliens as zombies” motif. The big payoff of the film comes moments before the final hero versus villain scene when the camera shifts to the protagonist’s point of view. This scene should have been amazing, kinetic, and impactful. It was, however, not. I mention Doom because it failed where, this episode’s film, Hardcore Henry excelled.

This film is also, NOT a video game adaptation. However, it is obviously inspired by first person shooter games. Hardcore Henry is too a sc-fi yarn, with a story so straightforward you’d nary find anything too strange about it (on paper!). A man named Henry is awoken from his medically-induced coma only to find that he has cybernetic limbs and no ability to talk. He’s soon attacked by a comic book style villain who, inexplicably, has telekinetic powers. Henry must flee to save himself, and possibly the woman he loves. Along the way, he receives help from many silly characters, all played by Sharlto Copley (this is the single detail that, on paper and in the film, is indeed strange). It all comes to a head after Henry battles wave after wave of henchmen, when he faces the main villain, Akan.

It all reads as pretty simple and hardly strange, yet, it’s the experience of the film that makes it unusual. Its kinetic camera work, by way of strapping a go-pro to the face of the stunt performer, is at once immersive and nearly – if not totally – nauseating.  It’s an experimental film that may be one of a kind (though, I have seen at least two other films try first person POV, but to less kinetic results).  And as light on character/story as the film may be, it’s the action and stunt work that elevate this from the random straight-to-video fare that this type of story would have you expect.

Hardcore Henry is a real doozy of a film. So here, Jon and I have taken the task of examining one of the most barfy movies ever. 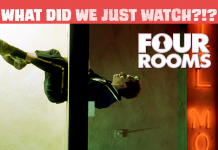