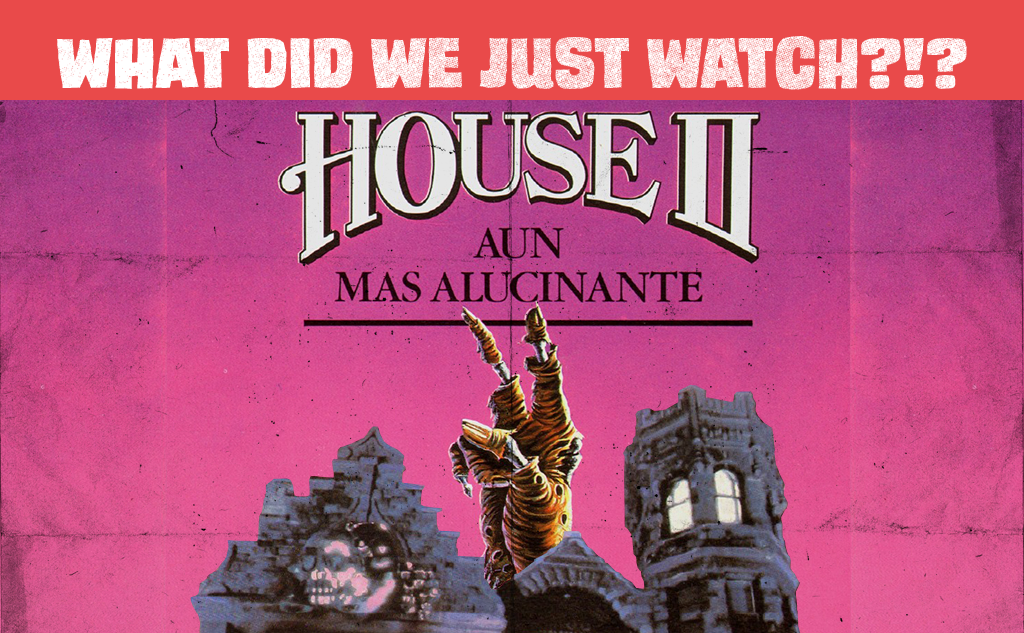 In the late 1980s a franchise was floundering, that had a somewhat strong start: The House franchise. The first film featured TV stars William Katt, Richard Moll, and George Wendt. This first installment was imaginative and strange and tackled themes of PTSD related to the Viet Nam conflict. It was an odd mix of things, but found mild success. So, producer, Sean S. Cunningham (of Friday the 13th fame) pushed forward with the sequel, House II: the Second Story (get it? it’s a pun!).

Written and directed by Ethan Wiley, House II centers around Jessie (Ari Gross), who inherits an incredibly strange house (The Stimson House – which I mistake the interiors as that of the Ennis House of House on Haunted Hill and Blade Runner fame).  Jessie’s best pal, Charlie (Jonathan Stark), shows up, and they both explore the mysteries of the house. Easy. As. That. But not so fast! They unearth a mummy (Royal Dano)! Rooms in the house serve as portals to alternate universes featuring creatures of all kinds!

All because of some crazy mystical Crystal Skull! So it’s up to Jessie and Charlie to keep the skull out of the wrong hands/mouths of anyone/thing that wants it. House II doesn’t exactly feature any ghosts – rather, alternate-dimension hopping creatures, and Zombie/Mummies from the Old West, as well as an Aztec cult hell-bent on virgin sacrifice! And all of this takes place on Halloween!

House II is my favorite Halloween film, in part because the Halloween bit is so peripheral, allowing the story to do it’s thing without falling into the gimmick of being a holiday movie. And what’s even better/worse is that Jon hadn’t seen this flick until now – whereas I watch it nearly yearly, give or take. So, saddle up and mosey on over, kick your feet up and have a listen as we talk about this bonkers haunted house film. Place your bets: Will Jon like it or will he hate it, or simply be indifferent? Well? Listen & find out!