Sometimes you just wanna watch something weird, you know? I mean, we live in a time when things have become a bit stale. The best TV shows teeter into being the worst TV shows (I’m looking at YOU, TWD) and the most professionally crafted effects-laden movies have become humdrum, in spite of all of the applied bells and whistles. With exception of one or two titles here and there, it seems the best place to find challenging yet rewarding fare is in the VOD/Home market. Companies like IFC and Magnolia have contributed well to this market, and now the major streamers (Netflix, Hulu, Amazon) have entered the fray with TV shows and original films acquired via whatever buzz festivals. And now, though not new to the game, simply less talked about, DirecTV has been releasing TV shows and movies just like the big guys, with little murmurs here and there. One such release is the abduction/escape thriller Rupture.

Rupture also features Peter Stormare and Michael Chiklis (among others) as members of this mysteriously organized, yet seemingly disheveled group. Are they scientists? Are they demonic? Are they alien? What are these experiments in fear that they conduct on their human quarry? And why do they even mention the word human as if they aren’t? You’ll have to watch to truly understand.

Directed by Steven Shainberg, he who directed the S&M romance Secretary and the Diane Arbus biopic Fur. Rupture sees this director in new territory than his previous outings. Join us as we explore this new venture and discuss this odd and colorful and a little bit bonkers thriller. 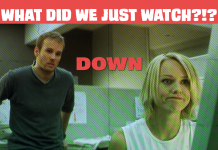