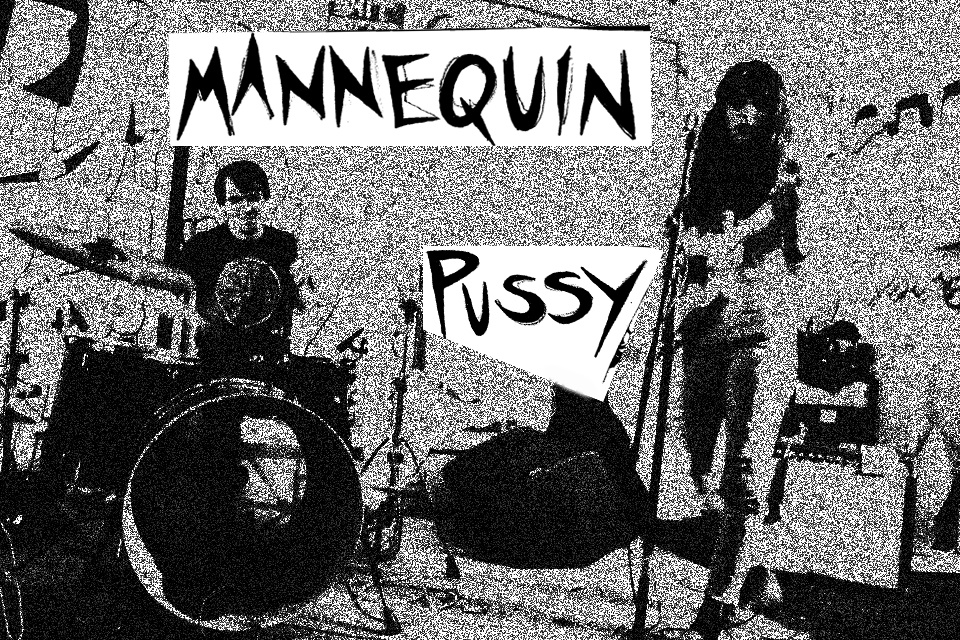 When I was in the 5th grade I came up with THE GREATEST BAND NAME IN THE HISTORY OF ROCK AND ROLL. That band name was Kool Kidz Korporation. ( I later in life learned that other associations used those same initials in their name, namely the Klan, so I changed my band name to The Great Catspy)

Up until a very recent discovery on the internet, my quest for the greatest band name in rock and roll history was hopeless. Filled with tireless nights of searching through record label’s website and Wikipedia pages, my hope was running low.
In comes Mannequin Pussy.
Borrowing from two of my favorite things in the world (department stores and adorable little kittens) this band name is almost as exquisite as their sonic presence.

Here is our conversation with Mannequin Pussy:
Ouch, My Ego!: Earlier this year, you toured with Colleen Green throughout the Midwest and Texas. Can you tell us what your experience was like while in Texas, especially in McAllen?

Mannequin Pussy – Marissa Dabice: I love Texas! It’s big and desolate and the stars are beautiful. The people are beautiful, too! McAllen was the most wonderful surprise – I had no idea when to expect when we got down there and when we arrived everyone was so welcoming and excited. After our tour was done and people would ask me about my favorite shows, I always brought up McAllen. Patrick Garcia knows what he’s doing in a way most promoters don’t.

OME!: I couldn’t help but notice that your tour with the Lust-Cats takes place during Brooklyn’s CMJ Music Marathon. I know that MP is based out of this area, so I am curious: was there a conscious decision to avoid the massive festival, as many Texas bands do with SXSW, or was it merely a coincidence?

MP – Marisa: It’s just a happy coincidence. CMJ is not something we considered when booking the tour. I would much rather be in a place I’ve never been before playing for real people rather than playing a showcase for a bunch of jaded music bloggers.

OME!: How has your music been influenced by the city you live in?
MP – Marisa: Yes and no. I’m more influenced by my experiences than I am my environment. Some of those experiences have taken place in the city but others transcend a real physical place. Recently though, I’ve felt increasingly suffocated in the city and it’s led to a wave of new ideas.

OME!: The scene in South Texas is impossibly small, but on occasion, one does sense a strong communal effort amongst bands of different genres that are denominated by their appreciation for original music. How does this contrast to the scene in NYC / Brooklyn? Is there a ‘scene’?
MP – Marisa: Personally, I don’t think there is a ‘scene’ right now in NYC. There are people I’ve seen who have tried to create communities but end up booking the same 5 bands for every show – that’s not a scene, that’s a circle jerk. There are a few essential bands we play with that excite me but for the most part, things seem really fragmented right now. A lot of bands move here from other cities, trying to emulate or capture the success of past NYC bands and when that happens, you end up getting a lot of derivative crap. I can’t tell you how many times I’ve seen the same band, 40 different ways. If I ever seen another band of boring white guys desperate for a licensing deal, it would be too soon.

OME!: I read in a recent interview you did for Village Voice that Colleen Green and Alex from the Lust-Cats were particularly inspiring in regards to pursuing a tour, recording, and generally focusing on MP. Are there any other musicians who you have found to be influential, or inspiring, to the creative process in MP?
MP – Marisa: I like to say that I studied music at the Colleen Green conservatory of music. Everything I have learned about music, I have learned from her. I am extremely lucky in that the musicians that have influenced me the most are people that are among my closest friends. Alex & Robin from the Lust Cats are the reason I started playing music. Nicole and Rachel from Slutever are the people I can talk to about anything and everything and have been a major influence on me. Back when I said that NYC doesn’t have a “scene,” it didn’t mean that we weren’t a part of something at this moment. We just happen to live far away from our sister bands.

OME!: Do you have a favorite(s) book or author(s)?
MP – Marisa: Stranger in a Strange Land by Robert A. Heinlein. It’s the greatest, most fantastic story ever told. I usually don’t fuck with novels because non-fiction is intense enough to satisfy me but I have a major weak spot for science fiction. When it was originally published in 1961, the publisher cut out like 25% or something of the novel. They said it was excessively long and dealt with too much questionable material (mainly sex and cults) and were afraid it wouldn’t sell. After Heinlein died though, his widow made sure to get the original manuscript published – if you plan to read it, make sure you get that version. It’s worth it.

OME: Besides the addition of your new drummer, how do you feel Mannequin Pussy has grown as a band since the Meatslave demos?
MP – Marisa: I love Thanasi and Drew so much. When Drew joined, that’s when we really became a family. We’re writing together more and it feels very communal and natural.

OME: What is your favorite type of food to eat on tour, assuming it had absolutely nothing to do with repercussive health issues? Pizza, Chains, home-cooked, bacon, etc?
MP -Marisa: Bacon, egg and cheese sandwich and a V8 juice to ward off the sick.

OME: So far, what have been some of your places cities and venues to play, and why?
MP – Marisa: I feel lucky to be all hung up on this question because in two weeks we’ve played so many great shows. Top three shows so far though: Wesleyan University, Shanghai Nobby’s in St. Augustine and the Cuddlepunx House in Tallahassee. Nobby’s is the best rock n’ roll bar I’ve ever been to – it’s family owned and Dave, the patriarch of the family, is the coolest, most welcoming guy. St. Augustine is a beautiful, spooky town on the Atlantic Ocean. It’s a very special place.

OME: What can you expect out of your show in McAllen?
MP – Marisa: I try not to have expectations for shows. I know this much: we’ll roll up to McAllen at a reasonable hour, drop our stuff off at Patrick’s and then head to the venue. For everything else that happens after that, you’ll just have to come and see for yourself

Be sure to catch Mannequin Pussy along with Lust-Cats of the Gutters, The Sad Campers (<3) Japanese to English and Tweenage Crisis, Friday, October 18 at The Thirsty Monkey!!
(https://www.facebook.com/events/161395947383656/)