Long ago when I was a young teen, this “dumb dudes” movie came out called Bill & Ted’s Excellent Adventure, starring Keanu Reeves, Alex Winter, and George Carlin. It was a silly time-travel romp that was cleverly written by Chris Matheson and Ed Solomon, and directed by Stephen Herek.

At this time in my youth, I had but one friend, and we bonded over this film, watching it pretty much all summer. And when its sequel, Bogus Journey, came out, we watched that, too. At the time, we were fans of the first, but liked the second, though I think we were not mature enough to understand what Bogus Journey had to offer: Bill & Ted die, become ghosts, go to hell, meet their ‘demons,’ escape hell, beat death, sneak into heaven, enlist the help of some brilliant martians, and thwart a nefarious mastermind and his evil robots.

Years later, I would sing lead vocals on a cover of a Weezer song called “Why Bother?” The band I sang with was named something else at the time (I explain more in this episode), but a quick flash of inspiration and we changed the band name for this one song to STATION! This change is significant as it’s the name of two characters in Bogus Journey that supposedly represent a pivotal moment in the film. This is all to say, Bill & Ted was very important to me ever since I had seen the first film.

Years further and I met my wife (our very own) Elbee, and we bonded over my two puppies, the band sElf and the Bill & Ted movies. I found it only fitting that we return to these two masterworks in light of an article that Elbee wrote for Cinepunx called: “I Can’t Believe We Just Melvined Death!”: A Look at Horror and Existentialism in BILL AND TED’S BOGUS JOURNEY. You could consider this episode a companion piece to that article.  So if you would, please enjoy this look back at a possibly little thought of, oft dismissed (well, NOT ANYMORE) duology: the Bill & Ted Movies! 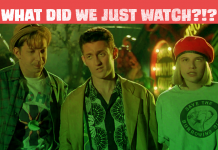