1970s American cinema has always bothered me. If early ’70s, then it’s any number of things, be it obvious repercussions of the Viet Nam War era, civil unrest, grimy cityscapes, or crumbling infrastructure. It all just leaves me feeling bad. The mid ’70s gets a little better, but it’s the late ’70s that shines a glimmer of hope that cinema will be much better in the near future. Halloween from 1978 is one such film that everyone touts, and with good reason, but 1979’s Tourist Trap, which has largely flown under the radar, is the true promise of strange things to come.

Starring Chuck Connors and Tanya Roberts, Tourist Trap is about a group of young adults who have been waylaid during a road trip. In need of some help, they seek a garage that might fix their car, and end up finding a roadside attraction: the titular Tourist Trap.  It’s a kind of house of wax, with mannequins lining every room, in various costumes. Other than the uncanny creepiness of stationary non-people, there’s nothing too foreboding going on…until there is!

You see, there may or may not be (there absolutely is!) a maniac on the loose, stalking and murdering the nice young folks. And here, “nice” is key. Not one single person is a cliché horror movie jerk. Each have a kind of maturity not seen in slasher films ever since. But, even then, they are an attractive bunch, more or less, yet the film never seems to exploit this fact. This movie even features a rather wholesome skinny dipping scene! (Yes, Wholesome! Go figure!) But slashers, there’s nothing so strange about the average slasher flick, nothing weird at all, so why do an episode about it?

Joining me to answer that very question is past guest, Ken Reid, your TV Guidance Counselor. We discuss the film, obviously, but touch on other topics like Cable TV, ESP & Satanic Panic, and the undeniable influence that the late Tobe Hooper’s claim to fame, Texas Chainsaw Massacre had upon this screwy little horror movie: a movie that plays like a nightmare that seemingly has no end. Watch the trailer, hunt the film down, and listen as we dig into this incredibly strange and unique entry of the American slasher lexicon that is Tourist Trap. 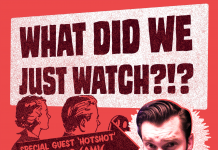 BEYOND THE BLACK RAINBOW