The Golden Dawn are an Austin, Tx based group formed around 1966, originally consisting of members George Kinney, Bobby Rector, Tommy Ramsey, Bill Hallmark, and Jimmy Bird. They were friends and contemporaries of well-known Texas psych group The 13th Floor Elevators, and unfortunately, they were also dismissed by the mainstream press at the time as a mere 13th Floor Elevator knock-off. This unfortunate label cursed The Golden Dawn, and the original line-up dissolved almost immediately following the release of their 1968 debut album Power Plant.

However, the true power and message that their music represented has managed to outlive the superficial negative reviews it originally received. Power Plant has become regarded as a classic album of the 1960’s and a demand to see the group live led to singer and guitarist George Kinney reforming the group in the 2000’s with some of the original members.

The reformed group played Austin Psych Fest on Saturday May 3rd. We took the opportunity to ask George Kinney about the groups history and message. Read the interview after checking out this essential cut from Power Plant.

Michael Flanagan – What cities would a Texas Tour for The Golden Dawn stop in during the 1960’s?

George Kinney – Houston, San Antonio, Austin, Kerrville, Waco, Port Arkansas…that’s about it. We were planning a trip to San Francisco, but our disastrous contract with International Artists (Record Label) pretty much stopped the band in its tracks. Plus, Tommy Ramsey, the lead guitar player, got drafted.

M.F – How would you describe the vibe that the golden dawn tried to express through its music?

G.K – I guess the best word nowadays would be “holistic”. We were south Austin good ol’ boys, but we were turned on. We had fistfights on stage, but we were for peace. The essential vibe that we hoped to express, however, was a deep integration of the main inner forces that drive humans… heart, head, and body…love, reason, and sexuality.

M – What are some groups from that time who you thought were very good but aren’t well known now?

G – Of course the 13th Floor Elevators would top the list. But I really liked the Lost and Found and Fever Tree with Michael Knoose. Jerry LIghtfoot, the blues guitar king of Houston (now deceased), was a show that was unbelievably awesome. I sat in with his band often at Billy Blues club in Houston back then.

M – The Moving Sidewalks (members of ZZ Top) played Psych Fest last year, you were a part of the same scene as them. Did you play any shows together? What was the night of a show like that like?

G – I never really hung out with that band. It was only later that I developed a fondness for ZZ Top. I never saw them as a psych band, but they played the hell out of rock n roll. We were outlaws and space cowboys, out to tell the world about higher consciousness. Mainstream acceptance was always our hope, but it was not a very realistic one. It’s hard to modify anthropological conditioning that has gone on for a few thousand years. But, hey, we tried.

M – Being from a revolutionary time that still strongly influences the present, how do you find the world that has become? Is it better or worse than you hoped for? Do you think we are on the right track?

G – I’ll say this and I really mean it. I know for sure I was on the right track…I still am. The human species is on a cusp in evolution. The next level to achieve requires psychological evolution. Quantum physics, the new science, is proving that consciousness is the ground of all being…god, if you will. That’s what we were talking about back then, but now cutting edge science is backing those ideas up. The new paradigm in human experience is at hand. But the battle for the human mind and heart is still raging, with our radical capitalist ideology blocking the way at every turn. There is a right side and a wrong side. Sin is infidelity to one’s higher self. It’s not that complicated, really.

M – Do you have a show the golden dawn has played that particularly sticks out in your mind as special. If so, why?

G – Strangely, the Austin Psych Fest two years ago was such a gig. It was magical. I had just had a liver transplant and I was really celebrating just being alive. The crowd was so inspirational. That’s what makes it all worthwhile. 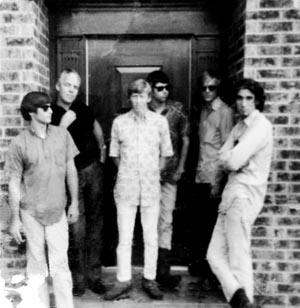 M – A lot of great groups passed through north Texas in the 60’s.The Beatles, Jimi Hendrix, The Doors, Led Zeppelin, to name a few. Do you have any exceptional memories of performances like this you might have attended? Be that you were a big part of the music scene, particularly in Texas, did you often get a chance to spend time with some of the era’s well known artists before or after shows or while on tour? What were some of your notable and interesting experiences?

G – I’m sorry to disappoint you, but I have very little in the way of experiences you think I might have had. There was a major periodical in England that published a really nice issue of Psychedelic Magazine in which all the current bands were listed and discussed. Along with some really nice praises of my songs, the author tagged me the most reclusive of all the psychedelic writers. That person had a gift for identifying the real situation. I have always stayed away from the campfire a bit. I lived (and still do) out in the country with my wife, kids, dogs, and horses, only coming to town for supplies and to play gigs. I spend so much time writing my own songs and playing them that I never really had time to associate with many other bands on a regular basis. My stuff has always been different, not really that entertaining so to speak…it’s like going to college or training of some kind. But folks have enjoyed it all over the world, so I guess it can’t be too disassociated with the pack. However, I did get to witness Johnny Winters and Boz Skaggs at the Vulcan Gas Co. in Austin. Also Muddy Waters at the Armadillo, and I was very good friends with Townes Van Zandt. I also did a show in Nashville with Johnny Cash.

M – How related is the groups name to the Hermetic order of the Golden Dawn? What do you have to say about that?

G – I never really got into Aliester Crowley, though I read several of his books and considered his metaphysical ideas. But I found the ideas of Gurdjieff and Ouspenski so superior to Crowley that I found his teachings to be much shallower than the stuff I was trying to learn. But the name of the order stuck. I took it to mean simply, the dawning of the new era in human evolution, of which we were some of the leaders.

M – What was the concept behind your album, Power Plant?

G – The concept was primarily that our species was mired in a stagnated pool of maleficent complacency, trapped in conditioned behavior that is propagated by false information about our identity, the kind of beings we are. The transcendent aspects of our being are being ignored in favor of the ego-based selves that mass marketing and false religion has imposed upon us through mass media and other more traditional methods of deception. My idea, after meeting Tommy Hall (13th Floor Elevators) and discovering the teachings of Gurdjieff and Ouspenski, was to devote my life to discovering all I could about the human potential for psychological evolution and to write, play music, and sing about it in hopes I might be able to chip away at the vast, cathedral fallacies in our understanding of our selves and our world.

M – What do you think are some good examples and bad examples of drug use? Drugs being defined as anything from coffee to cocaine.

G – Good question. Much too involved for this interview, but let me take a shot at a bumper sticker answer. I remember my first time getting really drunk on my dads whiskey hidden in the tool shed. I loved it and hated the aftermath. Alcohol was always that way for me. But marijuana, LSD, mescaline, and especially mushrooms…that was very, very different. In stead of getting messed up and doing stupid things that I regretted the next day on alcohol, psychedelics opened my mind to a multi-dimensional universe that existed both within and without me, like Harrison’s song so beautifully stated. I made connections and was able to relate almost everything that I experienced to a transcendent unity in which everything related to everything else. I discovered that this information was what gave meaning to my life. Still, after a while of exploring the vast universe of drug induced realities, I learned firmly that it was time for me to stop using them and find a way to solidify the wisdom I had gained by vitalizing my own latent powers of transcendence. I could relate outlandish tales of psychedelic experiences, or maybe I couldn’t. It’s almost impossible to describe a vivid psychedelic experience because, by definition, it takes you beyond material reality, so words, being material constructs or metaphors, are not capable of accurately describing the actual experience. But I tried most of my life to create art that alludes to the transcendent experiences of life, knowing all along that one must experience it for his or her self.

M – What are your experiences with South Texas’s Rio Grande Valley?

G – I have hunted and fished in South Texas all my life. My dad and brothers spent many hours and days roaming around the cactus backlands and drinking in border town brothels. I also did my stint conducting illicit business practices in that area of the world. I fell in love with Mexico and am still enamored with the entire Hispanic culture, both in Texas and in Mexico. Both my novels, The Bandit King and Brave New Texas center around South Texas and Mexico.  Both books are available through Amazon both in hard copy and e-books. Give ’em a read, I think you might find something in there you might not find anywhere else. That’s it. That’s my story and I’m stickin’ to it.

I think its safe to say that George’s original artistic intent of “chipping away at the vast, cathedral fallacies in our understanding of our selves and our world” has not been in vain, being that this article is in existence and promoting consciousness about 50 years after he started doing so.

You can find out more about George’s novels and music here:

Thanks to Austin Psych Fest for helping make this interview happen! https://www.facebook.com/austinpsychfest