Peaking Lights are a husband and wife duo formed in San Francisco around 2008. They spent some time based in Wisconsin, and now reside back in California. When I think of words to describe their experimental electronic music I come up with meditative trance, funk, groove, rock and dub. They have said that they don’t write their songs out, so much as they feel them out.

Since starting Peaking Lights, Aaron Coyes and Indra Dunis have had two sons, one who’s vocal is featured on their latest album, Lucifer. Lucifer follows up 2008’s self-released Clearvoiant (later released on Night People), and 2011’s fantastic 936 (Mexican Summer). The group is currently in the studio working on their next record. In advance of their performance at Austin Psych Fest on Friday May 2nd. I had the opportunity to have Indra answer some questions of mine. Check out the interview while jamming this track from Lucifer: 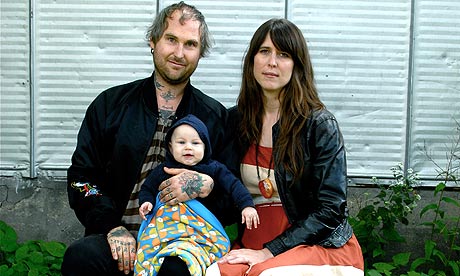 MF – Your latest album is titled “Lucifer”, the cover artwork is bare white with a vibrant neon blue colored font baring the title. Included inside the album are some images of the moon, of earth, and of some more vibrantly colored geometry. Could you please provide a bit of insight into all this album artwork?

ID – Lucifer originally means “morning star” and “bringer of light”, and refers to the earliest light of the day, dawn, Venus, and the light of the moon. We wanted this album to be the night time continuation of our album 936, celebrating the evening hours to the first light of day again.

M – When I find people who seem to be in a healthy and positive relationship I like to grill them about how you make that happen. I wont grill you, but maybe you can share some advice?

I – I don’t think we really know what we’re doing, it’s a day by day adventure, but I think it’s good to remember all relationships have ups and downs. No relationship is perfect, you just have to be willing to work things out and keep on loving.

M – How do you define spirituality and what do you think is good or bad about it?

I – To me spirituality is the understanding that there’s more to us than just our flesh and bones, that there’s a higher self or spirit in each of us that is part of a greater energy, and that energy links all life. I feel there is a lot going on in reality that we can’t “see” but that we can feel and know is there. To me spirituality isn’t bad at all, it’s religion and dogma that has created a lot of problems and divided people.

M – You two owned a vintage clothing/music store, what was that experience like? How has business influenced your music and vice-versa?

I – Yeah, we opened a store called good style shop when we lived in Wisconsin in 2009. We moved from the Bay Area to WI to start fresh and live out in the woods, and that’s where Peaking Lights was formed. We lived in the country near Spring Green, WI, and wanted to open a business that could help support our music making and also be a space to host all ages shows and art. We were kinda living off selling thrifted clothes and records on eBay and thought a brick and mortar shop would be fun. It was, but I think we enjoyed the creating of it, and the shows and art more than actually sitting in the shop day after day doing retail! But it became a really cool scene and helped us make a lot of great friends and host some awesome music. We sold it to our buddy Pete in 2011, and he is doing a better job than us running it, and has made it into a killer vintage shop. Our experience in WI birthed lot of things for us, the shop was just one of those. But when things with PL took off a bit we couldn’t wait to get back to the west coast, back to the ocean and sun, so we moved to LA a couple years ago.

M – You gave thanks, in Lucifer’s liner notes, to “those who bring lightness in dark”.  Who are some people who you think are currently doing a good job bringing lightness to the dark?

I – Lots of people, more than I think gets acknowledged. The smallest gesture of positivity, like giving a compliment or making someone laugh, or feeding your hungry cat, or noticing the beauty in something ordinary are all ways people bring lightness.

M – Could you describe the difference between touring with your friends in your youth and touring later in life with your mother, wife/husband, and child?

I – Ha! Big difference! When you are young with your friends it’s all about yourself and having a good time, and learning how to pace yourself and not party too hard! But now it’s a lot of logistics, more planning and organizing and trying to make sure everyone is doing ok, that the kids have a nice place to hang out while we are at the show, stuff like that. No more crashing on random floors- that’s awesome! It can be stressful if we have a tight schedule, but traveling as a family can be fun when we combine vacation with tour. Generally our tours are shorter and slower paced now which is nice. Also it’s great that when we go on tour no one gets left behind, it’s a family affair 🙂

M – You’ll be in Austin in early May for Psych Fest. Have you spent a lot of time in Texas? What sorts of impressions has it made on you?

I -I have a bunch of family in Texas, between Austin and San Antonio, so I’ve been coming to visit regularly since my dad moved there when I was 11. I have a lot of fondness for the hill country, the Mexican food, the heat, but outside of Austin its a little too conservative for me!

M – I recently discovered an artist named Trin Tran who is from Wisconsin. Are you acquainted with him?

I – Trin Tran is my old buddy! I’ve known Steve for like 20 years, and seen him in all kinds of projects, but Trin Tran is the greatest. Actually, I think it was my band members in my old band, numbers, that challenged him to start a new project to play a show with us when we were on tour coming through Madison and that’s when Trin Tran was born… He’s amazingly talented, and now his son is in the band with him! We are playing a show with him in Madison after we leave psych fest on May 6, can’t wait!

M -What are some other cool artist’s from Wisconsin that would be good to know about?

I – Golden Donna, Samantha Glass, Second Family Band, Dead Luke, Julian Lynch, spiral joy band, spires that in the sunset rise, problem child, I’m probably forgetting some and there’s probably more by now but we haven’t been there in a couple years!

M – When I think about it, having a child seems so fascinating. Do you constantly sort of get deep into these wild concepts having to do with this conscious/not-conscious being?  Do you even think that there’s a sort of lack of consciousness in our infancies?  What is your experience like?

I – Having kids is the trippiest wildest ride, so psychedelic, and such an incredible insight into the human experience. Watching a human grow from birth is so cool. I realized that even though at birth babies are helpless and can’t do anything for themselves, there’s already that spark and consciousness that’s really strong. They can’t control their bodies very well, but they are very present, absorbing so much. Each of our sons has had their own character and personality that has been there since birth. Like our son Mikko has always been so social and interested in meeting people, and Marlon is a bit more shy, but has an incredible sense of humor- he’s often cracking up at stuff that he finds funny- and he doesn’t even talk yet! It’s so cool to see these little people develop into themselves.

M – What are some good things you’ve found in your travels that you think people could do well in taking examples from?

I – I think the best travelers are ones who know how to take care of themselves, and are not afraid of new experiences. A new place can be so interesting to check out, but ultimately when you are on tour your first concerns are often basic- where’s the food? Where will I sleep? Where’s the coffee? Life on the road is a combination of constant stimulation and new stuff with trying to fulfill your basic needs. Also you’re constantly making new friends. It might sound cliché, but when you travel a lot you realize people are essentially the same everywhere, everyone has the same desires, needs, dreams- even though cultures may be a bit different. It’s so cool to feel like I have friends all over the world.

M – How about bad things that you think people ought too pay more attention to?

I – Hmm I don’t think you need to travel to understand what is bad, there’s obviously a lot of problems in the world. I think our leaders are bought out and too driven by money, I think corporate interests and politics should be separate. If you think about all the shitty things that are happening to the environment, or wars, or even individual strife, it is often a result of corporate greed. That’s probably the biggest bad thing I see going on around us. You can get pretty bogged down by thinking about all the horrible things happening in the world. But you know what? On an individual level I think people are just as capable of doing good things as they are bad things, so it can come down to personal choices, and deciding to be compassionate, and doing things that are positive.

Interview with The Golden Dawn